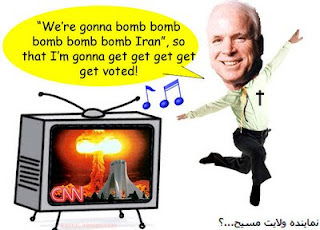 When asked about the increase in US exports to Iran during the Bush Administration, with the largest export being cigarettes, McCain was reported to have said, “Maybe that’s a way of killing them,” he said, laughing, according to a pool report. “ This follows his "Bomb Bomb Bomb Iran "joke."

Why is it that the media brushes off McCain's flip and irresponsible remarks by saying, "Oh, it's McCain just being McCain"? Yet when Obama made those off-the-cuff "bitter" remarks at a supposedly private function, it dominated the news cycles for a month?
Think about it.
They won't admit it, but the press is definitely giving McCain a free ride on his missteps. Everything Obama does is under a microscope, however. And don't give me the "but we all know who McCain is and we know so little of Obama." That's a load of excrement.

The McCain of today is not the McCain of 2000. He has abandoned many of his once held principles to win an election, and now he acts like the drunken grandfather at a wedding with his disturbing jokes. hehehe

But the media still is working for him. Old memories won't die.
Posted by Steve Charing at 1:12 PM