As we marched, nation marches towards equality 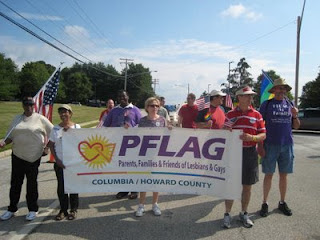 The following letter was published in July 10 edition of the Howard County Times/Columbia Flier:
In sharing in the celebration of our great nation's 232nd birthday, it was an honor for the Columbia/Howard County chapter of PFLAG-Parents, Families and Friends of Lesbians and Gays-to participate for the first time in the 4th of July River Hill parade.
Over 20 members of our chapter marched with our neighbors up Great Star Drive to affirm one of the basic tenets in the Declaration of Independence to which we honor: "We hold these truths to be self-evident, that all men are created equal."
Our group consisted of parents who have gay, lesbian, bisexual or transgendered children; gays and lesbians of all ages; same-sex couples in long-term relationships and those with toddlers of their own. Some live in the very River Hill neighborhood through which the parade took place.
We did not possess a fancy float, but we proudly marched behind our chapter's banner while waving American and rainbow flags and wishing all the spectators a Happy 4th.
As we passed by the large and diverse crowd and tossed tasty goodies to the many children, we were moved by the warm reception from the onlookers with a large number voicing their support and encouragement. We not only trumpeted our country, but we also celebrated the progress we are making towards achieving the Declaration's principles of full equality for all, though clearly much more progress is needed.
The recognition and good wishes we received on this glorious day were heartwarming, and PFLAG looks forward to marching with our neighbors again next year.
Steve Charing
Clarksville
Steve Charing is the media coordinator for PFLAG-Columbia/Howard County.
Posted by Steve Charing at 10:39 AM