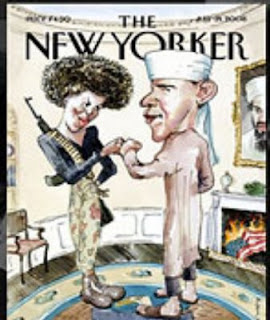 Yes, The New Yorker is satirical. But its upcoming cover that depicts Barack and Michelle Obama in the manner they did was over the top. Why? Because it simply feeds into the false stereotypes that the right wing has been desperately trying to push in an effort to smear the Obamas.
Why shouldn't they? They have John McCain as their standard bearer. They know he cannot win unless the Obama family is demonized. And The New Yorker simply aids in that process--wittingly or not.
Keep in mind this is the country that was dumb enough to elect George W. Bush TWICE. A quarter of the electorate still thinks Iraq attacked us on September 11 and believes Iraq posed a military threat to us. They buy into this crap, and The New Yorker should know better. Never overestimate the intelligence of the American people.

Over 10% of the country according to a recent Newsweek poll believe Obama is Muslim. All this cartoon did was to spread the myth because the editor had to explain the purpose of the cover. When you have to explain satire, it is considered a failure.

According to MSNBC, Obama had been the focus of their covers by a 2 to 1 ratio over McCain since January. If the magazine wants to be fair about perpetuating falsehoods, why don't they sketch McCain dressed in a hospital gown in a nursing home wielding an M-16 chanting "My friends, the surge is working. The surge is working..." countless times.

Posted by Steve Charing at 4:53 PM