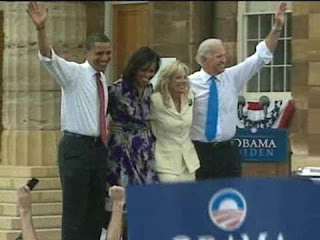 John McCain's memory lapse about the number of houses he owns is perhaps not the only memory issue facing Camp McSame. Following Sen. Obama's superb choice for vice president-- Sen. Joe Biden--the Republican talking points were dispatched to their surrogates so they can all sing from the same twisted hymnal (as usual).
The selection of Sen. Biden was derided by these folks as an admission by Sen. Obama that he lacks the foreign policy experience needed to be president. The fact that he made this decision is supposedly a weakness and, therefore, it proves Sen. Obama is not ready to be president. This is the GOP's predictable narrative.
But oh, the short memory! Let's refresh it for these guys and gals who are hoping the American voters have no sense of history--even recent history. Recall how Ronald Reagan chose George H.W. Bush to be his running mate because it would plug the many holes in Reagan's resume. To the GOP partisans, that was a legitimate, pragmatic move. As I've said many times before, Reagan had no more experience related to being commander-in-chief than Obama is said to lack.
Then, of course, was the infamous decision by George War Bush to pick Dick Cheney to be his veep for the same reasons (lack of foreign policy gravitas). How the country suffered from that! Not much protest from the Republicans then. In fact, Bush was wildly praised for the selection, which was actually made by Cheney himself. It was a harbinger of things to come.
However, Obama's choice is knocked down, and what's worse and not surprisingly, they used the the rationale from the two aforementioned Republican candidates for their choices to bludgeon Obama.
The fact is, the GOP is disappointed they did not have a chance to whack the Clintons. And Biden, who receives widespread bipartisan respect, is expected to use McCain as a punching bag, and they know that.
Posted by Steve Charing at 11:54 PM