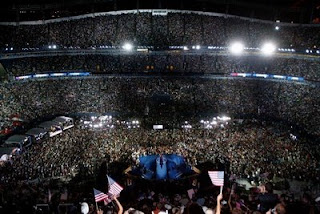 One line in Obama’s powerful acceptance speech may have won him the election.

Watching the Democratic Convention this week and waiting for "red meat" to be hurled at President Bush, Vice President Cheney and John McCain was indeed frustrating. The Dems have been for so long tepid at their conventions while the GOP goes after the opposition like blood thirty dogs. And guess what? That strategy of attack works most of the time.

I liken the helpless frustration and disappointment towards the Convention’s wussy approach, whereby the election was slipping through our fingers, to being stranded at sea without a life vest, the boat is leaking, and sinking into shark-infested waters.
Sure, Bush and McCain were mentioned in the many speeches. And some had dead-on zingers in them, such as by Gov. Brian Schweitzer of Montana, Gov. Bill Richardson, Senator John Kerry and President Bill Clinton. But none of them were hard hitting. Not like the GOP convention will be sure to offer.
Despite an approval rating that is bordering on negative numbers, Why wasn’t Vice President Dick Cheney demonized given he was such an obvious target? His dark secrecy, his pushing us into Iraq, the trampling of the Constitution, his personal alliance with big oil, the incredible no-bid contracts in Iraq, and his involvement in the Valery Plaime affair would be a speechwriter’s dream. Alas, Cheney was mentioned so infrequently that one would have gotten the impression he recently died and the Dems were avoiding his name out of respect.
Nonetheless, there were spectacular speeches from Michelle Obama, Hillary Clinton, Bill Clinton, Joe Biden and a seemingly rushed Al Gore. But none were better than the candidate himself, Barack Obama. It was one for the ages.
He hit all the right themes and was presidential. He was determined and earnest. His delivery is unmatched. But it was one line in the entire speech that was not only memorable, but it might have changed the image that the Republicans (and the help of the Clintons during the primaries) created bestowed upon him. And that line was, "If John McCain wants to have a debate about who has the temperament, and judgment, to serve as the next Commander-in-Chief, that’s a debate I’m ready to have."
With this statement Obama challenged McCain and showed he will not back off despite the flurry of ads and attacks that pigeonholed Obama as not ready to lead the country. They will still use it, of course, since they have no other strategy to defeat him. But Obama’s surprise strike not only demonstrated he wasn’t going to yield to the GOP demagoguery, but he has motivated his supporters even more so. That results in enhanced getting out the vote efforts, increased monetary donations and organizational heft.
One speech for the ages. One line. One more better chance for victory.
Posted by Steve Charing at 3:20 PM