We Take Pride in Our Allies 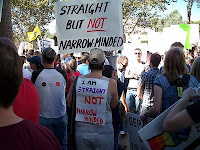 Our front page feature interview of straight collegiate athlete Hudson Taylor was intended to highlight the importance of having straight allies on our side in the quest for equality. As we celebrate Pride and reflect upon why as members of the LGBTcommunity we should be proud, one of the major reasons is the fact we have many straight friends and allies aiding our cause.

The inconvenient truth is that if we try to go it alone, we will get nowhere. Simply put, the LGBT community by itself does not have the numbers to affect the outcome of policy decision-making or alter elections. With estimates that indicate we comprise anywhere from 2 to 10 percent of the U.S. population, it is clear the math isn't there.

For us to succeed in the myriad unresolved LGBT-related issues, we must attract straight allies to bolster our numbers to influence lawmakers at all levels. Aside from Hudson Taylor who has stuck his neck out to publicly support LGBT rights and advocated for the end of homophobia in sports at the expense of losing some friendships along the way, there are many other straight folks who have also courageously taken a strong stand for equality and continue to do so.

Representative Patrick Murphy of Pennsylvania, an Iraq war veteran, spearheaded the efforts in the House of Representatives to repeal "Don't Ask, Don't Tell." Being straight and a combat veteran, Mr. Murphy possesses the credibility to persuade his colleagues that the policy as it exists is discriminatory and has hurt national security.

Closer to home, Maryland's Attorney General Douglas F. Gansler has been another true advocate for LGBT equality. In February he issued an opinion against vitriolic opposition from conservatives that allowed Maryland to recognize valid same-sex marriages performed in other jurisdictions.

The law and precedent were on his side, and Mr. Gansler could have left it at that and continued to carry out his duties. Rather, Mr. Gansler demonstrated the political courage so sorely needed by elected officials—especially Democrats—to not only be on the right side of fairness and equality but to go out and fight for it. Mr. Gansler has not just talked equality, he is trying to do something to achieve it, and he does it in a public way.

Since the opinion was issued, Mr. Gansler spoke before a number of LGBT political groups and religious and civic organizations encouraging those in attendance to keep up the fight for marriage equality. Considered a likely candidate for Governor in 2014, some pundits have speculated that Mr. Gansler is taking a huge political risk in championing this issue. Undaunted, he believes it's the right thing to do. And he could be encouraged by the fact that the recent Washington Post poll indicated that more Marylanders, by a narrow margin, support same-sex marriage than oppose it.

We expect the margin to widen by 2014 as young voters who tend to regard marriage equality as a no-brainer enter the voting pool and replace the older conservative voters. Having an increasing number of Gay-Straight Alliances in schools across the country is a major contributor towards this goal as does the GLSEN-led National Day of Silence that brings awareness to the need for safe schools and other LGBT issues.

The efforts in Maryland have also been bolstered by the Maryland Black Family Alliance—a civil rights advocacy organization consisting of mainly straight African-American individuals. This group has been highly visible and outspoken in their beliefs that marriage equality is indeed a civil right and condemns those preachers who cherry pick biblical passages to oppose LGBT equality.

Then you have the good folks in PFLAG—Parents, Families and Friends of Lesbians and Gays. Although the organization is not just for parents anymore as more and more lgbt people have hopped on board, it is the first group of straight allies to help our cause when it began in 1972. Now there are over 500 chapters in the U.S. What better ally could one hope for other than a parent of an LGBT child?

Furthermore, PFLAG has a program called Straight for Equality, which is a national outreach and education project that empowers straight allies in supporting and advocating on behalf of LGBT people. PFLAG offers the tools and strategies needed to attract more straight allies to the cause.

Added to the mix is the growing number of people in the entertainment industry who are coming out for LGBT rights. The battle over Proposition 8 in California served as a catalyst for this activism, and it hasn't waned. From the world of movies, television and music we are seeing more personalities unabashedly supporting our cause. Allies such as MSNBC's Keith Olbermann have been invaluable in the struggle to repeal DADT and advance other LGBT issues.

And let's not forget the number one ally-in-chief, President Barack Obama. While many activists have criticized him, and I believe unfairly, for not acting swiftly enough on lgbt initiatives, he has proven to be the first and only President who has not only talked the talk but in several significant instances, walked the walk. Read his Proclamation of LGBT Pride Month for a summary of the key actions the President has taken on our behalf.

We can increase our efforts to attract allies by having more LGBT folks coming out when feasible. When family members, co-workers, employers, friends and neighbors know that someone is lgbt, the odds are they will want to help secure rights for that individual. Almost immediately one can increase support exponentially just by coming out.

And education on important LGBT issues by political, religious and social justice groups is needed to garner further support in the straight community.

The wind is at our backs now. We are gaining momentum during this slow-moving battle to achieve full equality. And with more allies to give our movement a crucial boost, we will get there.

As we celebrate Pride, we should not only be proud of ourselves but also those wonderful allies, elected officials or not, who are helping us big time.