Youth Will Create the Change We Need 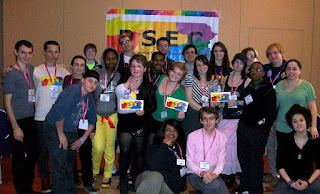 Liam Adams, 21, a biology/pre-med student at Indiana University of Pennsylvania (IUP), was among 3,000 who descended upon Baltimore for the National Gay and Lesbian Task Force’s 24th Annual Creating Change conference late January. It appeared that at least 2,000 of them were Liam’s peers—under age 25.

As a member of the Pennsylvania Student Equality Coalition coordinating committee and an IUP Pride Alliance Program Coordinator, Liam is quite busy being involved with the LGBT rights movement. So when this year’s Creating Change conference was announced, he ventured south to Baltimore with a bunch of his coalition colleagues to see how he can further help create change for the better.

“I wanted to attend Creating Change because I love the different LGBT conferences that I have attended since I have come out,” Liam (pictured at rear row, right) told me. “These conferences gave me great opportunity to learn many things about the LGBT family and ways that I can help advocate for our future.”

A number of institutes, seminars and workshops among the total of over 260 were geared towards youth. “LGBTQ Youth Organizing: From the Intersections OUT!”, “Working it Out in Rural Schools Settings: LGBTQ Youth,” “Building a Youth-led Movement,” The Trevor Project Lifeguard Workshop,” “Balancing Act-ivism,” and “Beyond the GSA” were just some of those offered.

But it was a workshop on LGBT history that impressed Liam the most. His favorite was “Remembering Frank Kameny and Discovering LGBT History.” Liam explained, “Having grown up in a very heterosexual family I had never learned any LGBT history, and it is fascinating to see the many triumphs whether big or small that our [LGBTQ] family faced in the start of the movement.”

The consciousness about gay history—the journey from the pre-Stonewall era to the present day—is usually rare among LGBTQ youth, but not so at the Creating Change conference. There was indeed a degree of seriousness, an earnest desire from those youth attending to learn from veterans of the LGBT rights wars who are training these reinforcements, if you will, for future battles.

This focus does not come easy given the chaotic nature of growing up and trying to succeed in college. It’s even harder when one has to struggle to come out to family members and friends.

“I have been out for about two years now, but when I first came out I wasn't open to everyone,” Liam points out. “Coming from a very Catholic homophobic family, I was ashamed of myself, but I have since learned to embrace myself, and this has made a huge difference in my life.”

Having successfully risen to those challenges will help Liam and others with similar histories be better prepared and tougher for the fights ahead. I met students from Oregon, Michigan, Ohio, Illinois and elsewhere—all were members of LGBTQ groups that made it to Baltimore to learn more about the movement, develop skills and to network with other like-minded peers. Their goals had much in common in that they seek full equality for all LGBTQ people no matter the state.

Today’s LGBTQ youth have been broadly criticized for not taking an interest in the battles of their predecessors in the LGBT movement. Many adults say, falsely, that LGBTQ kids today have all the support organizations at their disposal with a text message or a click of a mouse and benefiting from increased general acceptance in the U.S. While the support network may be strong, kids still have to deal with family resistance, which is arguably the number one hurdle.

It is true that there are many LGBTQ youth who are politically apathetic (as is the case with their older counterparts) and aren’t activists-in-training like Liam and the other Creating Change participants. The challenge is to convince them that being treated as a second-class citizen is unacceptable. Hopefully, the more activist-minded youth will make that case as they interact with one another.

As for the straight youth, they are far more accepting of LGBTQ peers than previous generations. They shrug their shoulders at the mere mention of same-sex marriage. They had no problem with the repeal of “Don’t Ask, Don’t Tell.” They see no reason why a person should be fired from their job just for being LGBT. They cannot understand why transgender people should be discriminated against.

Yet, as we know from the all-too-many suicides resulting from bullying in schools, the lack of federal job protections for LGBT individuals, and marriage equality in a country that was founded on equality, there remains a significant distance to go.

Nonetheless, the old-time attitudes are slowly evaporating. Seizing upon that phenomenon and opportunity, the new generation of kids—gay and straight—are arming themselves with the knowledge necessary to create the change we all need.

Politicians would be smart to take notice of these shifting attitudes. The youth have been swelling the voter ranks and affecting elections. The Obama campaign brought more young people into the political process than any time since the 1960’s. Can that be sustained? That is the question, and that is the hope.

Posted by Steve Charing at 4:20 PM