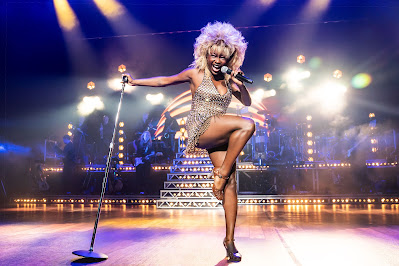 Adding to its growing list of solid jukebox/bio musicals, Baltimore’s Hippodrome Theatre is presenting Tina: The Tina Turner Musical as part of the show’s 30-city North America tour. This mounting could not have been better if it tried. With spectacular staging and lighting, wonderful toe-tapping songs, a brilliantly acted gritty storyline, and an abundance of musical talent on display, Tina delivers one of the best all-around jukebox musicals in memory.

Directed by Phyllida Lloyd with a book by Katori Hall, Frank Ketelaar, and Kees Prins, the musical takes the audience on a journey in the life of Anna-Mae Bullock (whose name eventually changed to Tina Turner) from a youngster in Nutbush, Tennessee to the summit of an internationally revered musical career. Her story chronicles one of the most amazing comebacks in music history in becoming “The Queen of Rock ‘n Roll.”

Tina’s journey is riveting. As much as the musical showcases Tina Turner’s catalogue of big-time hits that earned her 12 Grammy Awards and her twice induction into the Rock and Roll Hall of Fame, what she had to endure along the way is captivating.

Many of the dramatic episodes involve her tumultuous, sometimes violent relationship with Ike Turner, who launched Tina’s career and gave her the stage name she continued to use. Ike was a short-tempered, controlling, abusive womanizer who slapped Tina during their frequent arguments. She maintained that she loved him but was forced to run away from him after yet another violent fight and his striking one of Tina’s two children.

Tina also had to confront blatant racism and ageism not only in the 60’s and 70’s South but also in dealing with record label moguls. Moreover, her mother, Zelma, whom Tina believed was never supportive of her, adds to the struggle.  Even without any music in this show, the compelling drama alone would make for good theatre.

But there is music, and lots of it. The audience will be familiar with Tina Turner’s hits performed in the show though not presented in chronological order of their release. Such favorites like “River Deep—Mountain High,” “Private Dancer,” “Proud Mary,” “What’s Love Got to Do With It,” “We Don’t Need Another Hero,” and “(Simply) The Best” are among the 24 musical numbers in the show.

"...Tina delivers one of the best all-around jukebox musicals in memory."

Because of the drama woven throughout, the songs performed do not constitute a concert. Nonetheless, a two-song mini-concert with all the spectacular lighting and other concert effects takes place following the curtain call, so wait for that.

The entire production is an electrifying spectacle. With brilliant hue-rich lighting by Bruno Poet and projections by Jeff Sugg, the scenes change not just smoothly, not just seamlessly, but instantly—in a blink—lending to the rapid pacing of the show. Nevin Steinberg’s superb sound design and Music Director Anne Shuttlesworth and the orchestra support the vocalists exceptionally without overpowering them.  Credit Set and Costume Designer Mark Thompson for his contributions to the show’s aesthetics.

In a tour-de-force, it’s not enough to say that Ms. Villanueva has a magnificent singing voice with enormous range and power. She can also dance, and she can act. In fact, her acting skills grab your attention as much as her vocals.

This versatile performer is extremely convincing as a woman who had to suffer through the abuse of Ike reflected by frequent shouting matches embedded in their arguments. Tina’s frayed relationship with her mother and the dynamics with her managers during her career are nuanced and conveyed well. All of this while belting out songs to near perfection, and she performs in just about all of them.

Her most touching moment was near the end of the first act when Tina escaped from Ike after another violent episode and was reduced to literally beg a motel clerk to let her spend the night. She only had 36 cents in her possession but promised to pay him back. Her heartrending number “I Don’t Wanna Fight No More” describes her plight. 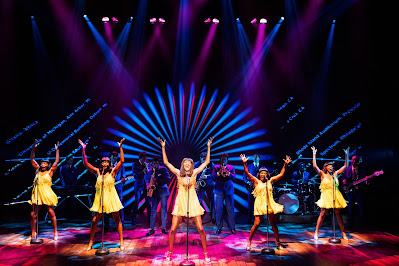 Garrett Turner is convincing as the gruff, manipulative and violent villain Ike Turner. Mr. Turner (no relation) delivers a strong, commanding performance and contributes to the high drama. So effective is he in the role that at curtain call he received a smattering of boos from the audience. His deep baritone is on display in the solo “Rocket 88/Matchbox” and with Ms. Villanueva in the iconic “Proud Mary.”

Roz White delivers a mighty performance as Tina’s mother Zelma. Having been abused by her own husband, Zelma has been tough on Tina throughout her life. She even attempted to get Tina and Ike to reconcile prior to her death but to no avail. Ms. White is excellent in the role and performs well in a duet with Ms. Villanueva in the reprise of “Don’t Turn Around.”

Young Ayvah Johnson is a standout and an audience favorite in portraying Young Anna-Mae. Her excellent vocals are on display in the group number “Nutbush City Limits.”

Other notable cast members include Lael Van Keuren as Rhonda, Tina’s first manager; Taylor Blackman as Raymond, Tina’s second manager, Jacob Roberts-Miller (for this performance) as Roger Davies as another manager; Andre Hinds as Craig, Tina’s son; Parris Lewis as Alline, Tina’s sister; Antonio Beverly as Ronnie, another son of Tina; Geoffrey Kidwell as Phil Spector and other roles; and Ann Nesby as Tina’s grandmother, Gran Geogeanna. The remainder of the talented, high-energy cast and Ensemble contribute to the high quality of the production.

Tina: The Tina Turner Musical is a sterling production that showcases magnificent talent and songs and also brings to light in an honest manner some of the nagging sores of our society. This is a musical that should not be missed.

Running time. Two hours and 40 minutes with an intermission.

Advisory. The show contains scenes of domestic violence and profanity including the use of the N-word and is not recommended for children under 14.

Posted by Steve Charing at 1:35 PM