Why Not Include a Rally at Pride? 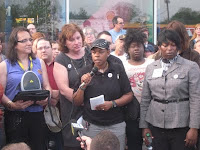 To some, the celebration of Pride month or weekend affords an opportunity to reflect on past successes within the LGBT community and look towards the future. To most, however, Pride has evolved into the big social event of the year drawing thousands of rainbow-minded folks to party, dance, drink, cruise, and yes, enjoy a colorful parade and a nice festival in the process.

The first Gay Pride parade and celebration in the U.S. took place in June 1970 in New York to commemorate the one-year anniversary of the Stonewall uprising that gave birth to the modern gay rights movement. The parade was a political statement back then: we demand our rights.

While you don’t usually see elected officials or community leaders taking a microphone to rally the troops on behalf of a cause, there will be politicians aplenty trolling the crowd at the festival for donations and votes. That is a tradition at Pride celebrations, and there is nothing wrong with that.
In my view, this is the time to hold a rally. Those of us seeking equality need to get motivated to continue the journey after a disappointing spring. Why not allow community leaders to share the stage during the block party with drag performers and other entertainers to briefly address the masses on important LGBT issues? Or use the main stage at the festival?
Yes, Pride is a welcome respite from the sometimes depressing realities of the day. It is a party, and people should be allowed to enjoy a weekend of fabulous fun and festivities. I definitely want that as well.
But like no other day of the year, the LGBT community and allies in Baltimore come out in force at Pride, and the opportunity to reach thousands at one time that does not involve social media is enticing.
Not only would such a rally serve to galvanize the crowd to encourage volunteerism, but it would also present another opportunity to raise funds for cash-starved organizations. The fact that such a component is not included in the Pride schedule is a mistake and a lost opportunity.
There is no shortage of events, themes or causes to rally behind. For example:
On the positive side, over the past few months, we had experienced some wonderful successes that should make us proud. Not the least of which was President Obama’s signing into law the repeal of the discriminatory ‘Don’t Ask, Don’t Tell’ policy. Although there have been undue delays in implementing the change, official acceptance of openly gay and lesbian service members is a huge step on the road to equality.
We have seen entertainers, business leaders and professional athletes get behind the marriage equality effort in New York. This is particularly significant when it comes to pro athletes because so much of our culture in this country is wrapped around sports. The NBA’s strong repudiation of anti-gay slurs by some players is welcome and crucial towards reducing, if not eliminating, that form of bigotry.
We have seen a plethora of celebrities join the “It Gets Better” campaign.
We have seen in several polls how the country is moving closer to accepting the idea that loving members of the same gender can get married and enjoy the benefits and rights that are associated with marriage. The trends are even more favorable as the supportive younger generation is replacing the older conservative one.
We had seen a courageous fair-minded Republican leader of the Maryland Senate, Allan Kittleman, buck his party’s dogma and give up his leadership position to support marriage equality in the state.
We had seen a vote on marriage equality succeed in that very same Senate only to fall a couple of votes short of passage in the House of Delegates.
We also saw in Maryland a gender identity non-discrimination bill, albeit flawed, pass a legislative body (the House) for the first time but failed in the Senate.
And now we have a total of eight openly gay legislators—one of the highest totals in the nation.
On the negative side of the ledger, there was a brutal, persistent attack on a trans-woman, Chrissy Lee Polis at a Baltimore County McDonald’s. Out of this horrific incident, a new awareness of discrimination and violence towards our transgender brothers and sisters has been born. Hopefully, the imperative legislation next year will be fueled by this awareness.
Sadly, we are witnessing the possible disintegration of Equality Maryland as a viable force to achieve equality in the state. Its handling of personnel and the instability of the board coupled with a looming financial collapse has put the once renowned organization on the edge.
And on the 30th year anniversary that marked the discovery of the disease that has come to be called HIV/AIDS, reports indicated that the rate of infection among men having sex with men is once again on the rise. This is troubling, to be sure, and the concept of safe-sex needs to be driven home to our younger folks who feel they are invincible. Yes, there are treatments, which have mitigated a once-certain death sentence. But there is no cure or a preventative vaccine.
And if you need still another rallying point, you have NOM, the Catholic Church and politicians under the banner of “religion” who wish to deny us our rights as human beings.
All these points are worthy to rally around—individually or collectively. We won’t see such a rally as part of this year’s Pride. However, there is always next year, and it should be planned.
In the meantime, let’s enjoy ourselves and think of all the heroes that have brought us this far on the road to equality. Here’s to rainbows, balloons and triangles. Here’s to us all.
http://www.stevecharing.blogspot.com/.
Posted by Steve Charing at 1:00 AM